Average rating: 0 out of 5 stars, based on 0 reviews Write a review. Sharon Pickering. Walmart Tell us if something is incorrect. Out of stock. Get In-Stock Alert. Delivery not available. Pickup not available. About This Item We aim to show you accurate product information. Manufacturers, suppliers and others provide what you see here, and we have not verified it. See our disclaimer.

Counter-Terrorism Policing: Community, Cohesion and Security This book sets out to examine the impact of terrorism on the policing organisation and culturally diverse communities.

Specifications Publisher Springer New York. Customer Reviews. Write a review. See any care plans, options and policies that may be associated with this product. Email address. Please enter a valid email address. Walmart Services. Get to Know Us.

Customer Service. In The Spotlight. In , the coalition published a document entitled Creating the Conditions for Integration , which has pushed further the move away from multiculturalism that had been started by Labour, at least at the level of discourse. It criticised past government interventionism along racial or faith lines, adding that other factors such as location or socio-economic status also shape local societies.

It criticised anti-discrimination policy, which so far had remained unchallenged by the critics of multiculturalism:. In the past, integration challenges have been met in part with legal rights and obligations around equalities, discrimination and hate crime. This has not solved the problem and, where it has encouraged a focus on single issues and specific groups, may in some cases have exacerbated it. Accordingly, the governmental action programme that is proposed in the rest of the document is strikingly unambitious and consists of a ramshackle list of minor projects to fund youth programmes.

It also cites the Localism Act of as a means of empowering local communities. The Big Society — meaning the encouragement of civic engagement by all citizens in the delivery of public services and community activities — is often derided for its conceptual shallowness, but it does refer to some of the most fundamental tenets of British policy-making in the last twenty years. First, it is obvious that it serves to justify the disengagement of the state from local public services and the drastic reduction of the remit of local government action.

In this respect, it is distinct from New Labour, which had deeply reconceptualised and reorganised the modalities of state interventionism, including by introducing Public-Private Partnerships PPPs , but had not sought to shrink its perimeter. Tradition, community, family, faith, the space between the market and the state — this is the ground where our philosophy is planted. Typically this meant that local groups and projects, whether Christian, secular, or of other faiths, were now required to obtain the counter-signature of the local vicar to benefit from this programme.


In the area of local community partnerships, New Labour had already emphasised the role of the Church after the London bombings. The relationship between community and citizenship is ambiguous. On one level, communities are presented as inclusive. It refers to an elusive golden age, which is usually the first half of the twentieth century, when the working class was supposed to be organised harmoniously around trade unions and networks of solidarity at the local level.

In Britain, this has been explicitly put forward as the backbone of the ideological refoundation of the Labour party by Lord Glassman as part of the Blue Labour agenda supported by Ed Milliband in Blue Labour was meant to encapsulate both a nostalgia for the golden age of the working class and an anti-immigration stance in the name of the stability of communities. In this aspect of the community discourse, there are two types of communities pitted against each other: the minority community, deemed divisive and antagonistic to British values, and the majority, national community, which promotes inclusive values of human rights, tolerance and democracy.

That suspicion was however accompanied by the will to mediate with them through representative mainstream councils, such as the Muslim Council of Britain, but also through more radical groups. The former was perfectly consistent with the core ideas behind cohesion, i. Muslim community organisations willing to co-operate, on the other hand, would receive subsidies.

Many Muslim groups, notably in the North, refused to co-operate, and many of those that did co-operate did it undercover. Another major bone of contention stemmed from the fact that the impact of British foreign policy options in Iraq and Afghanistan on the radicalisation of certain British Muslims was ignored by the programme.

The programme has been subjected to an intense barrage of grassroots and academic criticisms. Their main thrust was that through PREVENT the government had explicitly constructed Islamic culture and religion as a major security threat, building on and amplifying a climate of prejudice against Muslims. This debate created a context in which successive governments, but particularly the Conservative-Liberal Democrat coalition after , sought to re-evaluate and reformulate the programme to make it less inflammatory.

This suggests that mobilisation by both Muslim and non-Muslim critics of the programme have resulted in its partial desecuritisation. Some of the local authorities required to implement the policy also disapproved of it to the extent that they refused to do so or did it under different names. However, this is a contradiction in terms, as Charles Husband and Yunis Alam have shown.

In , the funding for most of the programme was allocated authoritatively by central government to local authorities on the basis of the percentage of Muslims in their total population.

The correlation between the amount of funding and Muslims was tight and showed that this was by far the predominant factor in the allocation of funds. In so doing, the programme has triggered a series of negative feedback effects. Muslim community organisers or activists refuse the funds for fear of participating in a stigmatising system and losing credibility and respect within their community.

The contradiction in terms between cohesion and anti-terrorism is again apparent here, because the trust between the social worker and the community, which forms the basis of social work, is eroded by the suspicion among the community that he or she is in fact participating in the collection of sensitive information for the police.

This culturalist or theological approach to radicalisation makes light of its political dimension, assuming Islamic terrorism to be largely driven by purely religious motivations. 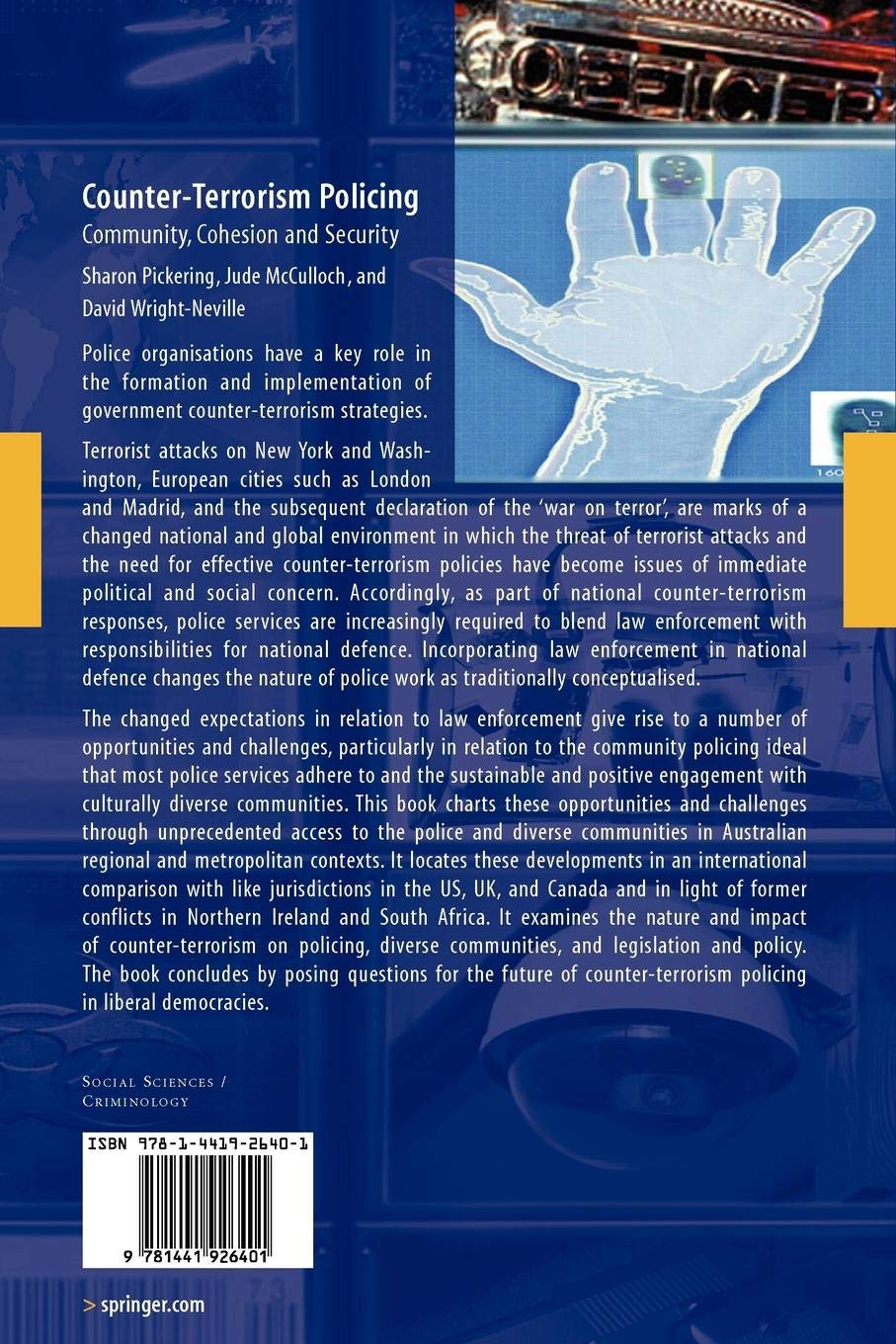 Yet much evidence in the UK suggests that there is considerable anger directed at British foreign policy invasion of Iraq, conflicts in the Middle-East among Muslim s and that this constitutes a favourable context for the violent radicalisation of some individuals. The refusal to address this point, which has been a mainstay of British government policy, has weakened the relevance of PREVENT and has only served to further reinforce the sense of estrangement of disaffected Muslims from the democratic process.

It obscures the fact that these processes are largely individual — explaining why some members of one given Islamic network may gravitate towards violence, while others will not. The dialogue between mainstream society and these organisations that PREVENT sought to organise was meant to bring them into the fold of mainstream society, thereby undercutting and isolating violent Islamism.

But this has exposed PREVENT to accusations of religious engineering, with the British state attempting to create authoritatively its own acceptable version of Islam instead of engaging in a political dialogue over issues such as foreign policy. The government was widely criticised for wasting an opportunity to improve the programme by taking into account the liberal criticisms outlined above. The decision to exclude from the programme some Islamist and Salafist groups, such as the STREET project in Brixton that had previously been used as a means of reaching disaffected Muslim youths exposed to violent Islamist ideology, was viewed by some practitioners of Prevent as particularly counter-productive and as a direct result of neo-conservative bias.

The first one was the proposal to distance the prevention of terrorism from the community cohesion agenda, and, more broadly, from the issue of immigrant integration. The funds were now targeted to areas defined not essentially in terms of the size of their Muslim populations, but according to more precise information on the potential for violent extremism. It is also this context that may explain the new dissociation between counter-terrorism and social work. The ethnic leadership in particular mainly Muslim leaders in cities like Bradford were accused of using the support of local authorities to impose traditional, illiberal values within their communities.

Community cohesion became an omnipresent guideline in a wide array of policies, from education to housing, youth work, social care, and all types of community partnerships. It implied the rejection of ethnic minority cultures as potentially separatist and self-segregating, unable or unwilling to share the values of the majority. The programme came under heavy criticism from diverse sections of the academic world and from the targeted communities themselves.

Despite its avowed objective of promoting community cohesion, it was widely criticised for stigmatising at the outset Muslim communities by authoritatively allocating funds to local authorities on the basis of the percentage of Muslims in their total population. It was derided for mixing uneasily social work and police work and was suspected of facilitating the surveillance of communities under the cover of innocuous activities for young people or women.

In both the community cohesion discourse after the riots, and in the PREVENT programme after the London bombings, a stated will to engage in dialogue with ethnic minority communities on the basis of common values resulted in the paradoxical reinforcement of ethnic stereotypes.

The omnipresence of the paradigm of community, culture or religion in British approaches to diversity suggests at least some level of continuity with the previously dominant multiculturalist approach. Only the essentialising and exclusionary dimension of ethnicised policy-making remains.

In its revised version of , PREVENT was aimed at extremism in general and moved away from the confusion between social work and counter-terrorism. Whether this can ultimately lead to a complete change of policy that would finally stop associating the terrorist threat with Muslim populations remains to be assessed in the longer term, although recent developments and their consequences, notably in France and Belgium, indicate that it is still far from being the case. Bauman, Zygmunt, Community, seeking safety in an insecure world Cambridge, Polity, Delanty, Gerard, Community London, Routledge,